Kieran and the Weird Window 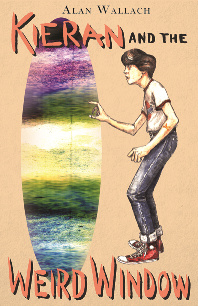 The first book in the popular Kieran Adventure series by author Alan Wallach is an enchanting adventure entitled Kieran and the Weird Window.

Download the book FREE, get it in paperback or read it free at wattpad.com.

Kieran was very tall for thirteen, six feet to be exact. Since he was also very smart, most people thought he was much older. A month ago, the librarian told him she thought he was sixteen. It surprised him. He was very thin with light brown hair which was always falling over his brown eyes. It seemed as if he was all legs. When he had a choice, he preferred to wear jeans, even in the summer when most everyone wore shorts.

He was in his last year at Muttonville middle school and couldn’t wait to get to high school. He lived in a nice white house on Cypress street. It stood out from the other houses on the street because it had bright yellow shutters. But that didn’t really matter because Kieran could have found it even if it didn’t.

Kieran had his own room. He considered himself very lucky to have his own space where he could follow his own pursuits. It’s not that he was a loner. He wasn’t. He had many friends and had much in common with them, sports in particular. He was a basketball nut. But he had some interests that were very much his own and he never found anyone to share them with. He appreciated his time alone. He didn’t have to explain to people why he did the things he did or liked what he liked. He wanted to do well in school because he was very interested in science and mathematics and had his eyes on being a professor like his father. So he was always attentive to his homework.

“Dinner is ready, Kieran. Go get your father.” Sarah Cummerford said. Sarah Cummerford was a pretty woman with a little pepper in her brown hair. Kieran looked more like her that like his father. Professor Cummerford was not nearly as tall as Kieran and was a little overweight. His hair was prematurely gray. He didn’t wear glasses but had horn rimmed ones for reading.