Kieran and the Visitor from Pimglammam 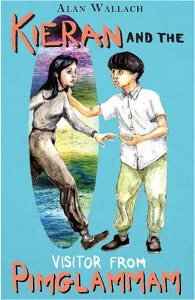 The second book in the Kieran series is Kieran and the Visitor from Pimglammam. Another compelling tale about Kieran’s adventures by author Alan Wallach.

Buy the book now or read it free at wattpad.com

Professor Cummerford said that they had to work on finding out how to control it. This meant they had to find out how to make the window appear and then to disappear. They couldn’t really use it if they couldn’t trust that it would stay stable. Even though he had worked with it for years with difficulty, he knew that there was always the danger.

He and Mr. Aguntint, the friend he had made from the Vigandond universe, worked on a language translator for years. It took so long to build one because they had difficulty communicating. The language barrier just trying to talk to each other was a real problem. And whenever one was in the other’s universe they were afraid that they would be stranded. As a result, they had to keep one eye on the window all the time for any hint that it was going to fade.

Now that Kieran was aware of the window, he could help because his father was so busy. The first thing they had to do was to find out as much as they could about the nature of the window. They also wanted to experiment on communicating through it. Having met Mr. Aguntint and his children Rikki and Bal, and after working for years to successfully create a translating machine, they could try to communicate through it safely. They had to work on how to do it.

When Professor Cummerford came home, Kieran asked him, “Dad, what do you think we should do next about the window?”

“Kieran, I’m going to be busy the next few weeks so I can’t work on it. There are a few things you can try. But you have to promise me that you won’t go through the window.”